Pune, December 14, 2020: This is a very old incident which took place three decades back. I was young then, 26 to be exact. Nonetheless, the incident is still afresh before my eyes. Some of us Indian journalists who were undergoing a journalism course in Bulgaria were enjoying drinks and music at a garden restaurant in Bourgas town of the East European country. A music group dressed in traditional Bulgarian attire was playing music in the dimly lit restaurant. Some of the hotel customers would leave their tables to join the dance floor at the centre. After spending more than a month in Bulgaria as a part of our journalism course there, even we Indian delegates had become bold enough to join the dancing floor, the young girls and women did not mind strangers joining them on the dance floor!

It was our daily schedule to have supper at our guesthouse at 7 pm and then and then leave for some hotels where we would hang around till 10 pm. There we would enjoy the music, some of us like me drank various varieties of the Bulgarian wines or Vodka, smoked Bulgarian cigarette Phoenix and also joined the dance floor.

While sipping Vodka (pronounced as Bodka in the local lingo), I happened to glance at one of the portraits there on the wall and I could not believe my eyes. There was a black and white photograph hung off the garden wall. But I was not too sure.

I had to draw the attention of my Indian friends to confirm about the portrait. There was disbelief which soon turned into loud murmurs and excitement among us Indian journalists. Now there was no mistaking about the photo. It was the photo of Indian actor, Hindi film industry’s veteran hero, Raj Kapoor!

Raj Kapoor’s photo in a town in Bulgaria! It was amazing!
Some of us could not suppress their curiosity and rushed to the reception counter to know how the photo of the veteran Indian actor had surfaced there. Of course, none of the people at the reception counter knew English but with the help of wild gestures and a few words, we learnt that Indian actor was indeed a very popular hero in Bulgaria too.

One of the stewards then approached the music group to have a word with the group leader. And lo! The music group soon started playing the famous tune of Raj Kapoor’s famous song ‘Mera Juta Hai Japani….’

One of the music group members had also started dancing in the legendary Raj Kapur dance steps style. Then we learnt that Raj Kapur’s Hindi films and his songs like ‘Aawara Hoon…..Aawara Hoon’ were very popular among the people in Russia and also the East European nations.

Now I must explain what we Indian journalists were doing in Bulgaria. Our group of 30 Indian journalists was undergoing a journalism course organised by the International Organisation of Journalists (IOJ) in Bulgaria. During that last phase of the Cold War years, in the 1980s, the IOJ used to conduct such courses for Indian journalists in the East European Block or the Warsaw Pact nations including East Germany, Poland, Italy, Rumania, Czechoslovakia, and others. That year, Bulgaria had hosted the journalism course for Indian delegates and as a general secretary of the Goa Union of Journalists, I was also a part of this course and a nationwide tour of Bulgaria and a brief visit to Soviet Russia. The Navhind Times where I was a staff reporter had sanctioned me full paid leave for the course.

It was then we realised that Hindi actor Raj Kapoor was a household name not only in Bulgaria but in Soviet Russia and also in the USSR-influenced East European nations. During that 1986 East European tour, I realised that the two most popular Indian names in Soviet Russia were the recently assassinated Indian Prime Minister Indira Gandhi and actor Raj Kapoor. During our Moscow tour, I had also seen a life-size statue of Indira Gandhi on an important traffic square in the USSR capital.

In Bulgaria, besides Indira Gandhi and Raj Kapoor, a third Indian name was equally popular. That was Nobel laureate poet Rabindranath Tagore who had visited Bulgaria in early 20th century.

Rabindrababu’s poems have also been translated into the Bulgarian language. During my stay in Bulgaria, I had leant to speak many sentences in Bulgarian language and was also able to read the Cyrillic script, also called as Russian script which is common among many East European countries’ languages.

Once our group had finished a visit at a textile factory in a Bulgarian city when a middle-aged employee approached us near the lift, held his cap in his hand and started taking those typical Raj Kapoor steps, singing ‘Aawara Hoon…. ‘Aawara Hoon…. !’’

All of us were spellbound. It was amazing to experience Raj Kapoor’s magic among the common folks in Bulgaria.

(A few years back, these incidents had flashed before my eyes as I conversed with a young manager in a supermarket in Paris. When Aditi, my daughter, told him that we were Indian tourists, his instant exclamation was ‘Oh, Shah Rukh Khan’s India!”.

That was a pleasant surprise. He was not fluent in English but we somehow managed to strike a conversation. He said that he was an SRK’s fan, liked his Hindi films, the music in the film and the very frequent dance sequences. He said that even without French sub-titles, he could understand the Hindi film story and that he also watched Hindi films of Rhitik Roshan, Aamir Khan and other Indian actors. How our actors have crossed national, linguistic and cultural borders to act as ambassadors of their respective nations!

“King Khan and the new generation of Hindi actors have indeed continued Raj Kapoor’s legacy of being India’s cultural ambassadors,” I had said to myself as I walked out of the supermarket. )

After the conclusion of the journalism certificate course in Bulgaria, we returned to India after a transit halt at Tashkent. The name of this city revived our memories of Indian Prime Minister Lal Bahadur Shastri who had breathed his last in Tashkent ( after the division of the USSR, now the capital of an independent nation Uzbekistan). When our flight arrived we arrived in New Delhi, the newly designed Indira Gandhi International Airport was already inaugurated. But those days, there were no moving walkways to help the passengers to easily cover the long distance from the plane to the airport’s immigration counters. I, along with other Indian journalists delegates, was moving on the enclosed corridor towards the check-in counters when suddenly my eyesight fell on an old co-passenger.

Unlike us who carried with us heavy warm clothes and other luggage as it could not be sent in cargo section due to weight limits, this very fair-complexioned, stout senior citizen carried no luggage with him. Visibly tired, he sat on one of those colourful bucket seats to rest for a while as I was about to pass by him. Looking sideways at him, I noticed that exhaustion had turned his very fair face red.

Suddenly, I froze in my steps.

It was Raj Kapoor who was now returning in the Aeroflot plane along with us from Soviet Russia, a country where he was an idol.
What was expected of me, standing just a few feet away from this veteran actor? That too just a few days after realising how much was he was loved in those foreign countries!

How I wish I should have at least shaken hands with this doyen of the Indian film industry, just to let him know our gratitude towards him for making us Indians proud on the foreign soil.

But I did neither. Perhaps, I was too shy or was not ready to disturb this celebrity’s privacy. Along with other colleagues, I hurriedly carried on my walk towards the airport counters, looked twice behind at the actor who had now resumed his walk.

Nearly two years later, Raj Kapoor, an asthmatic patient, collapsed during the ceremony held to honour him with the prestigious Dadasaheb Phalke award. A few days later in a hospital, he breathed his last.

Since then, I have always wondered who do they bestow the prestigious Dadasaheb Phalke award on film personalities when they are too old to enjoy the honour?

Raj Kapoor’s that black and white photograph hung on the Bulgarian city’s garden restaurant’s wall and the `‘Aawara Hoon … ‘Aawara Hoon ’ tune sung by people on the foreign land is still afresh in my mind. 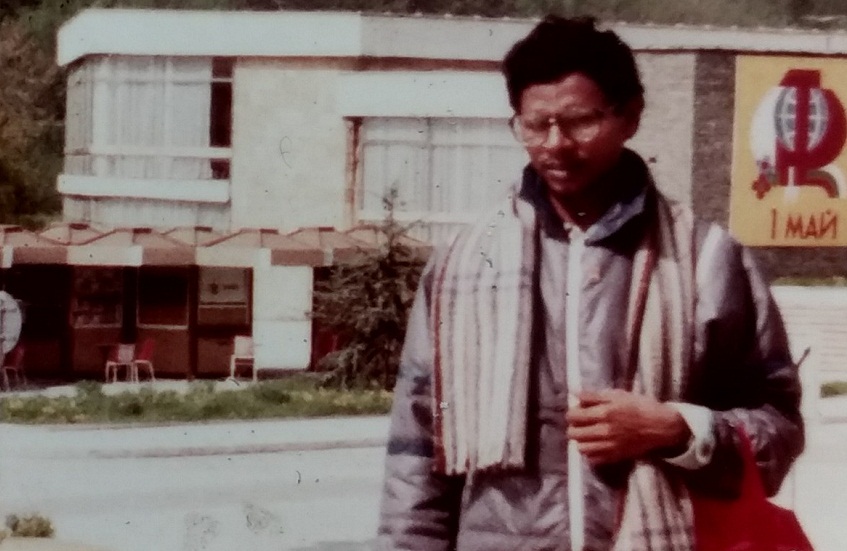 Pune based fitness trainer trains people free of cost on weekends; vows to make the IT workers fit under #weekendfitness

Pune: Three men arrested for demanding Rs 50,000 ransom from friend after taking him to Taljai hills for buying a dog