Bihar is the land of notable religious and social reformers who not only prescribed reform in dogmatic religious practices but also advocated social equality, social harmony and social justice- key factors for peace and tranquility in a region or state. This is the land of Buddha, Mahavir, Chandragupta Maurya, Samrat Ashoka, etc. And so also of Jayprakash Narayan, BP Mandal, Karpoori Thakur, etc. These people prescribed unity of the deprived, social cohesion through equality and end of exploitation.

There has been a strong social justice ethic, born from the fundamental principle of compassionate action, in Buddhism, which says, “When some decide to take for themselves beyond what is reasonable, others go without.” On the basis of Uttaradhyayanasutra, we can say that the essence of social harmony is virtue which leads everyone towards moral and just actions, spirituality, liberty & equality, love & peace and brotherhood. All these are norms of justice which justify the life of people and help to establish social justice in society. Emperor Ashoka was the pioneer of social harmony who tried to maintain economic and social justice throughout his kingdom applying the tenets of Buddhism.

According to Jayprakash Narayan, “Democratic socialism is a true democracy.” The conception of social justice can be found in his conception of socialism. Karpoori Thakur, the pioneer of social justice in Bihar, introduced reservation for OBCs in govt jobs and educational institutions and created sub-groups in OBCs. He wished to implement the essence of social justice in true sense. BP Mandal has attained a symbolic status for social justice movement in India. His ideals represented an umbrella coalition of the oppressed Bahujans comprising Shudra, Ati Shudra, Adivasis and Muslims symbolizing unity of the marginalized social groups. His recommendations and later its implementation have empowered OBCs of all religious affiliations, a milestone in the path of achieving social justice.

Many leaders like Lalu Prasad Yadav, Sharad Yadav, Nitish Kumar, Ram Vilas Paswan, etc., emerged from the JP movement from whom the Bahujans of Bihar had much expectations that they would get social justice and thus hoped for social, economic and political equality. They hoped for adequate representation in politics and participation in governance. Even though there was a genuine transfer of Bihar’s political power in favour of social justice, as the years passed, most of the leaders ended up getting coopted by the upper caste feudal oligarchy.

Result: complete derailment of social justice movement. Today’s political space is completely occupied by the Upper Caste Hindu (UCH) groups such as Brahmins, Rajputs, Bhumihars & Kayasthas who always try to maintain their political dominance by inventing diversionary and communal issues to keep engaged the ignorant masses. Although seats are reserved for SCs and STs in Bihar Assembly in proportion to their population share (39 for SCs & 2 for STs), they are deprived of genuine representatives who never raise the issues of progress and justice of these groups. Thus, Hindu OBCs and Muslims are the two groups which are actually deprived in terms of political representation and participation in governance. Even in OBCs, dominant castes like Yadav, Kurmi (cultivator) and Koiri (vegetable growers) have occupied most of the political space. Rashtriya Janata Dal (RJD), Janata Dal (United) (JD (U)) and Rashtriya Lok Samta Party (RLSP) are led respectively by Lalu Yadav, Nitish Kumar and Upendra Kushwaha, who, in undeclared way, give preference to Yadav, Kurmi and Koiri castes respectively. Lower OBC castes like Mallah and Been (Fishermen), Lohars (Blacksmiths), Teli (Oil Presser), Badhai (Carpenter), Turaha (Vegetable Seller), Kumhars (Potters), Noniya (Soil tiller), etc., are highly unrepresented in Bihar’s politics. The issue of political under representation of OBCs in Bihar politics is a broad issue which needs to be discussed in detailed manner. Here, we shall discuss the political underrepresentation of Muslims, their political marginalization, its probable reasons and also what needs to be done to improve the situation.

As per 2011 Census, population of Muslims in Bihar is 1,75,58,000 which is 16.87 per cent of total population of the state. Thus, Muslims are the second largest majority community and the largest minority group in Bihar. Muslims of Bihar had been in forefront in the freedom struggle and contributed significantly in political & social development of state. Unfortunately, since 1952 when the first election to Bihar Assembly was held, Muslims have never been represented in proportion to their population share and have always suffered huge political deprivation.

From 1952 till 2015, 15 elections to Bihar Legislative Assembly have been held in which a total of 334 Muslim MLAs got elected out of a total of 4,593 directly elected MLAs, thus Muslims representation during a period of almost 70 years is 7.27 per cent. On the basis of their population share, 633 Muslim MLAs were to be elected, however, they suffered a deprivation of 299 MLAs which is 47.24 per cent. This shows Muslims of Bihar are a highly politically deprived community. Unlike most other states, including Assam, UP and West Bengal one singular feature of Bihar assembly is the relative steadiness of number of Muslim members which ranged between 17 (1967 & 2005) and 29 (1985 & 2000) reaching the highest level of 29 members in 1985 which got repeated in 2000. Elections of 1952 and 1957 indicated that the Indian National Congress (INC) had near monopoly over Muslim members, but 1962 elections marked the beginning of Muslim political diversification. In 1977, Janata Party secured 13 and INC 8 Muslim seats out of a total of 24. In 1980-85, the INC staged a comeback in Bihar elections like rest of the country. Nationwide it was the period of Muslim-friendly electoral trend. It made Bihar Muslims secured the highest representation of 29 MLAs in 1985. From 1990 it is the JD formation which has been the major party representing Muslims. Let us examine Muslim representation in the last three Assembly elections i.e. 2005, 2010 & 2015.

In 2005 Bihar Assembly elections, first after the bifurcation leading to formation of Jharkhand in 2000, only 16 Muslims (6.58%) could manage to win the poll which was the lowest representation since Independence. Mehboob Ali Kaiser won by-poll of Assembly held in 2009 from Simri Bakhtiarpur on INC ticket and thus the number was raised to 17 (7.00 per cent). As per their share in population, they deserved 40 seats and thus they suffered a deprivation of 23 seats i.e. 57.50 per cent. Those 17 MLAs were distributed among 7 political parties. RJD and INC had jointly fielded 46 Muslims out of which only 9 could win – 4 on RJD and 5 on INC tickets. LJP had fielded 47 Muslim candidates but only one could win. While JD (U) had fielded 9 out of which four had won. One each belonged to CPI (ML), NCP and independent. A surprising but important fact of 2005 Bihar Assembly elections was that 42 Muslim candidates finished as runner up, many of whom with very thin margin, in some cases less than of thousand votes. The reasons could have been anti-incumbency against RJD, low number of Muslim nominees from JD (U) and division of Muslim votes. The then incumbent govt of RJD had fielded many Muslim candidates but most of them lost due to heavy anti-incumbency against RJD. The third reason could be the division of Muslim votes as JD (U) and BJP fought the lections together and Muslims overwhelmingly voted for JD (U).

In 2010, 19 Muslims got elected – 4 more than the previous Assembly of 2005 comprising 7.82 per cent of total seats, suffering a deprivation of 52.50 per cent. Of these 19 legislatures, maximum 7 were from JD (U), 6 from RJD, 3 from INC, 2 from LJP and one from BJP. Interestingly, three of the 4 INC and two of the three LJP legislatures were Muslims. Two Muslim women- Parween Amanullah and Razia Khatoon- became MLA, who, surprisingly, had defeated RJD candidates of Yadav caste. 36 Muslim candidates of different parties ended as runner up, at many places with very thin margins. The INC fielded 46 Muslim candidates followed by the RJD with 26. The JD (U) fielded 14 candidates, the LJP 10 and the BJP only one. Average performance of Muslims was also due to division of votes among four main political parties- RJD, LJP, INC and JD (U). The shifting of Muslim votes to Nitish was due to his reopening of Bhagalpur riot cases and conviction of the accused through speedy trials, keeping Bihar free from communal troubles and also sending a message that he would not compromise on issue of secularism despite sharing power with the BJP.

In 2015, the Grand Alliance of RJD, JD (U) and INC led by Nitish Kumar romped into a landslide victory in Bihar clearing way for Nitish to become CM the third time. 24 Muslim candidates got elected which is 9.88 per cent of total seats. Although the result was satisfactory, Muslims suffered 41.46 per cent deprivation. Among 24 MLAs, 12 belonged to RJD, 6 to INC, 5 to JD (U) and one to CPI (ML). 16 Muslim candidates ended as runner up. In 2015 Muslims had no confusion in choosing a secular party and they had overwhelmingly voted for the Alliance. However, they felt cheated as Nitish Kumar switched the alliance and shifted his loyalty to BJP without any valid reason.

Political analysts say there are various reasons behind huge political deprivation of Muslims in Bihar like elsewhere in other states. Main parties representing Muslims do not give nominations in proportion to their share in population. Over the years in Bihar, the INC gave 9 to 10 per cent tickets to Muslim candidates which is less than their share in population. RJD has given 10 per cent tickets to Muslim candidates and CPI and CPM nominated an average of 7 & 8 per cent respectively. The second reason is reservation of Muslim-dominated constituencies for SCs and STs. In these constituencies Muslims have more possibility to win due to their numerical strength. This very fact has been pointed out in the Sachar Committee Report of 2006. Field experience indicate that due to gerrymandering of Muslim dominated constituencies many of which have been so carved out that Muslims are not in position to decide the winning candidate. It’s a deliberate act of the delimitation authorities to make Muslims a minority in a constituency. Parties who take Muslim votes do not give tickets to Muslims in many Muslim dominated constituencies and they are asked to contest elections from a constituency which has low number of Muslims. The community has sizable population and is in position to decide the winner in around 50 constituencies in Kishanganj, Purnea, Araria, Katihar, Madhubani, Sitamarhi, Bhagalpur, Darbhanga, Siwan, Gopalganj, West Champaran and East Champaran. Division of Muslim votes is also one of the reasons when they have many choices and fail to judge who is the strongest.

Political empowerment is the key to all empowerments. Muslims of Bihar are socially, economically & educationally backward as they do not have proper and effective political representation. When seats are not reserved for a deprived section, it is the duty of an inclusive and caring government to ensure proper participation in politics and governance by evolving some other methods. These methods are basically part of a broader social justice spectrum. If the principles of social justice are implemented in true sense in Bihar, not only Muslims but also SCs, STs and OBCs can get proper share in politics and governance of the state. This would ultimately contribute to peace and harmony and all round development of the state. 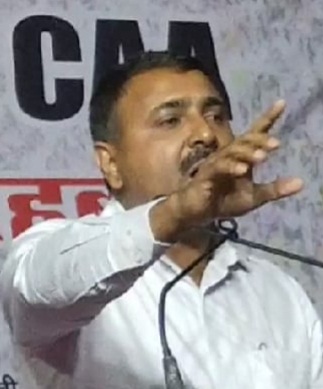 (Abdur Rahman, a native of West Champaran district in Bihar, is a Maharashtra cadre IPS officer of 1997 batch. His previous rank with Maharashtra Police was Inspector General of Police (IGP).)

Pimpri-Chinchwad: Now Pay The Autorickshaw Fare According To The Meter!

Pune: Don’t Hurry To Keep The Warm Clothes In The Closet! Here’s The Reason