Saurav Chauhan
Andaman, 21 April 2021: Our boat touched the floating platform on Ross Island 10 minutes after starting from North Bay. The entry to Ross Island is monitored. Usually, a boat carrying people cannot stay for more than a few hours. So we had a few hours to see the whole Island.

Work From Anywhere Day 1: Can You Work From The Andamans?

Before entering let’s delve a little into the history of Ross Island. Ross has a dark past, and it is related to India’s first rebellion of 1857. British colonists were caught off guard by the first independence movement in 1857 and flooded the jails with rebels throughout the mainland. Once the jails were overcrowded it was decided to set up a ‘Penal’ settlement on the Andaman Islands to ease the situation. In March of 1958 British Doctor, James P. Walker established the penal colony with 200 rebels (Read First Freedom Fighters).

Day 2 – The workday is here in Andaman!

Ross, with only about 700 meters in length, is one of the smallest of around 570+ Islands that form the Andaman & Nicobar Archipelago, was chosen as the Administrative Headquarter for the penal settlement.

All the luxuries of the era were present in this small Island for the British occupiers, from swimming pool to Tennis court to curated gardens, and a church with stained glass imported from Italy. All of course at the expense of the lives and wellbeing of the prisoners. From British Luxury and Brutality to inhumane Japanese occupation, this Island has witnessed it all.

So with wide-open eyes and a lot of questions we got off the boat and reached the entrance. To enter the island one has to purchase tickets, which has two varieties. There’s a 30 Rs ticket for entry where you can walk and see the island at your own pace, and then there’s an 80 Rs ticket for an electric golf cart like buggies, which takes around 20 minutes for the tour of the complete island. But they do leave a few places where there’s no concrete path. So being the kind of explorers we pretend to be, we opted for plain entry tickets without the cart.

Just as we entered, we were surprised to see hundreds of spotted deer roaming freely on the island, Which was beyond my understanding. How come a piece of land so small with no other way to reach other than deep-sea or air, can have such a high population of deer. Not only that but there’s also Peacocks and Rabbits. I still, after asking many locals and searching online for days, have no answer to it. But whatever the reason, it sure seems to be a small paradise. After walking for a few minutes we saw the famous ruins of Colonial-era structures. ‘Reclaimed by the 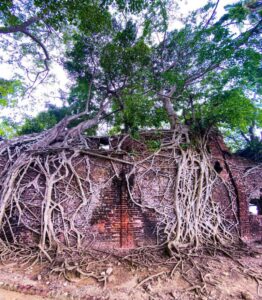 nature’ gets a completely new definition here. The ficus (Peepal) trees have completely enveloped the whole building. The giant knots of ficus trees like snakes have grappled the walls of the structures, once stood as the symbol of luxury of the British colonial past. Who would have thought that the structures built by the mighty British Empire will be turned into ruins and visited for amusement by the very people they colonised or enslaved.

The Church or the ruins of it is at some height and it took us around 10 minutes of the uphill track to reach it. The church had an eerie vibe to it, like at least a dozen ghosts reside there. The walls, entrance of the structure however still stand tall, the architecture and build remind of the beauty it must have held in its prime. The buggy road from there goes to the left, but we saw on the signboard that there’s a beach and a pond on the right, so obviously we went right. A little more walk and we saw the stairs descending to the raw but beautiful beach. It was a little scary as there were many uprooted trees and big rocks indicating the roughness of the sea towards this end. Also, there was no one 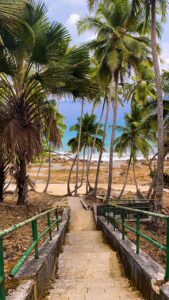 else on the beach, and I get why. but still, when we reached down on the white sand it felt nice. We enjoyed having the whole, beautiful white sand strip of the shore to ourselves. The large sea waves in the dark blue ocean had me hypnotised. My hypnosis though broke very soon, as I heard a scream from the Mrs behind me. She was running frantically towards the stairs and kept screaming until she climbed half of them. I was also scared but kept running towards her for her safety, in those 10, 15 seconds hundreds of negative thoughts crossed my mind. Then she finally shouted, Crab!!! Yes, a crab. She stepped on a dead coconut crab. Thankfully no one heard her scream, else all the tourists would have got a hysterical story for the rest of their trip.

We climbed back up and turned towards the pond, it was a small artificial pond that might be used for storing rainwater for the occupants, by nothing extraordinary. We then got back down to the side where our boat was parked and a few minutes later started our journey back to Port Blair.

It was a very small ride and took us less than 5 minutes to reach back to the same jetty in Port Blair from where we began.
We hopped back on our Scooty and rode back to our stay where our cold but delicious lunch awaited. After late lunch, we rested for a while and at around 5 PM decided to end the day on a high. So we rode to the Cornyn’s cove beach and sat there till the night set in. All this while observing the multiple ‘sets’ of newlyweds trying innumerable new poses for their pictures, which will become the memories to cherish after every fight they will have for the rest of their lives.

That ends our day 4. Please do come back for the next article of our Day 5 adventures. It’s a workday but full of surprises, from internet troubles to a small medical issue and a new local friend. Thanks for reading.

Are you an enthusiastic travel blogger or writer? Here’s a shout-out to collaborate with Punekarnews.in

Airbnb Seeks 12 People to Live Anywhere for One Year