Note : Not for the people who are easily offended. So Beware ! In the following post you may find glimpses of satire (good or bad you decide), though I am not a satirist. If you don’t find one, it may be because it is subtle and flowing as an ‘undercurrent’. The elections are over and hopefully so is the mud-slinging, atleast for the time being. A much needed stable government has been formed. Now, everyone is back to the pavilion and pondering over their respective results. Hence I find this time best to put forth some requests. The opinions and requests made are that of the writer and writer alone.

Request to the Left (or whatever is left of them anyway ) :
Please revise your ideology and your stand. It’s high time that you come out of your puritan Marxist dream and mould yourself with the traditions of this country. If you don’t know how, then please revisit the ideology of your founding fathers, the likes of Comrade Dange. As of present, you are neither helping the country and by the looks of it nor yourself.

Request to SP-BSP :
Please avoid the caste based politics of the extreme type. I know this may not be easy for you because the very foundations of your party are based on caste, but times are changing. It’s not that caste doesn’t play an important role. Unfortunately it does and it will continue to do so. Unavoidable. But you exaggerate it to the next level altogether. And if you can’t do it, please atleast put a zip-lock on Mr. Azam Khan’s mouth or make some similar arrangement.

Request to Aap :
Keep doing the good work that you have been doing especially in the field of education. Much appreciated. And is it possible for you to stop Mr. Kejriwal from posting rubbish on his twitter account or even stop talking from public stages for next few years? He is the ‘Tushar Kapoor’ of your party. He ruins it everytime he speaks. Also, stop accusing others recklessly and then backing out when asked for proofs. That’s lame at best. This is the reason that every candidate of yours lost by the margin of lakhs in your home turf. Maybe time to learn from BJD and Mr. Navin Pattanaik.

Request to Mr.Chandrababu Naidu
(The Kingmaker in the making who couldn’t make anything.) :
Just congratulate Mr. Jaganmohan Reddy and get it over with. Not a good move going against Mr. Modi and joining hands with Congress and then forming Mahagathbandhan, now was it? Especially when people in Andhra Pradesh are angry with Congress over division of the state. Well, please don’t dig your own grave anymore. You still have a pretty good image in the country. Better than the most, atleast.

Request to Mamta Banerjee : Nope. None. I mean I am not sure. Do requests still work in Bengal ?

Request to Congress :
You are playing a test match with the Captain who doesn’t even deserve to be in the playing 11. And if you claim that he is indeed the best player, then you probably deserve where you are. Come on man! We did want to see you forming a strong opposition. What good a democracy is without a good opposition? If in two back to back Loksabha defeats you haven’t decoded that country(wo)men don’t want to see the former Youth Icon as PM of India, I guess you never will. Zero seats in 17 States ? So what next? Losing the status as a National Party ? Don’t say you didn’t have money for advertisements. If Gandhi and Pawar family don’t have money to promote their respective heirs, I guess rest of the people should just go and claim BPL (Below Poverty Line) status. Please don’t cry foul that you didn’t have enough power. Rajasthan, MP, Chattisgarh and Karnataka are your governments. And no, the EVMs were not hacked. They cannot be hacked (with reference to India). In Hindi इस बात को गांठ बांध लो. Have a little faith in Election Commision and if it makes any sense, have some respect for the post of PM. After all he has been elected by the people. Please get together and do some introspection within the party and ask your representatives on different media channels to accept defeat politely and gracefully instead of arguing. And while you are at it, have you thought who is going to be the Leader of the Opposition? Not much of an option there, is it? Just asking!

Request to BJP :
Well! Congratulations on the well deserved grand success. Special congrats on winning the Amethi seat. But I have a few requests because with that kind of majority you get to decide the course of Indian Politics henceforth. So first and foremost, now that the elections are over, please refrain from bringing Nehru, Gandhi, Jinnah, Rajiv and Godse in conversations for the next 5 years. I know it won’t be easy. Media Channels will try and bait your spokespersons into it, and people like Sambit Patra may actually take the bait but still. A genuine request from a concerned citizen. In the last 5 years we have learned enough about our history. We have reached a saturation point. Secondly, I hope now that if a question is asked, we won’t get ‘This has been so for past 70 years’ or something similar for an answer. Enough of that too. Thirdly, may I request one unscripted interview of the Prime Minister in his next term ? Oh sorry! One ‘political unscripted interview’ ? I mean, am I entitled to it or is my eligibility as an Indian citizen not enough? I do stand for National Anthem in the theatres, if it counts. Next, may I also request your party workers and supporters alike to stop addressing JNU students as ‘Tukde tukde gang’ ? You’ve won against Kanhaiyya Kumar fair and square. That speaks volumes about what people think. So either file a chargesheet and prove your point or just let it be. Don’t go the Aap-way. That term/slogan is helping neither the country nor students progress in anyway. Sheer crap! Next, as applicable to other parties , kindly keep the loudmouths of your party in check. With the type of authoritarian leadership you enjoy, it is not a big task. Don’t blame other parties that they started it. I used to do that in school. Be the first. Raise the level of language that will be used by your people in debates and other platforms. Make Atalji proud on that front too. Oh! and are we done with the ‘I-will-make-the-largest-statue’ race yet? One should suffice, I guess. I would rather that you distribute books on these great (wo)men, so that instead of going gaga over the height of the statue , our youth can instill some values in their lives and achieve greater heights themselves. And last but not the least, your massive win means people still trust that you are their best bet, their guiding light through the tunnels of development to the other side where lies Dr. Kalam’s dream. Please don’t break that trust.

Request to Media :
The mighty mighty Fourth Pillar of the Nation. O you sole flagbearers of Nationalism! Before any requests I have a genuine query. Are you still a medium between the government and the public or have you been promoted to the rank of ‘Opi(ni)um’ where you force down your biased opinions on your guests, not allow them to speak and try to brainwash viewers in the process ? Ornub da, you and your shouting together give less information and more headaches. Unfortunately others have started following your pattern blindly except Rajat Kapoor. Atleast he maintains the decorum. Anyway I switched to Rajya Sabha TV long back, so it doesn’t matter much. And if I want an anti-establishment view, then I prefer Ravish. But still, if I may request, please talk about the issues that matter; issues that go beyond Nationalism. And can you stop propagating the shallow, useless terms like ‘Saffron Terror’ or ‘Urban Naxals’? Some idiot coins it and you run it on your shows when it can be avoided. What? TRP? Oh sorry sorry! Please carry on..

All Hail Democracy or as they say now a days Namo Namo ! ?? 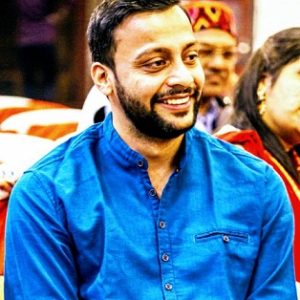 (The writer is a mechanical engineer turned mariner. A voracious reader and occasional writer. Traveller by passion, poet by inspiration. Curious of the supreme kind.)