​Pune, December 22: With an aim to run the legacy of Kathak dance which she learnt from her Kathak Guru Pandit Gopikrishna, internationally acclaimed Kathak danseuse Pandita Maneesha Sathe, started a Kathak Dance Institute in Pune in the year 1974, named as ‘Maneesha Nrityalaya’. On the occasion of completing successful 41 years, the institute celebrated its anniversary at Yashwantrao Chavan Natyagruha located in Kothrud, Pune. M 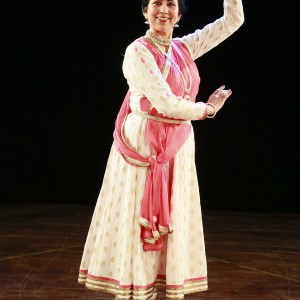 ore than 100 disciples of Pandita Manisha Sathe performed on stage during this program.

The program started off by paying tribute to Goddess Parvati by Pandita Maneesha Sathe. The audience was left mesmerized by her unbeatable energy, breathtaking foot works, and expressions. Later, the audience witnessed beautiful performances like Choutal, Shivastavan, Dhamar, Saawan by senior students of the dance institute. The Navarasa presentation by Junior students left the audience spellbound. Apart from this, performances su
ch as Trivat, Sargam, Tarana received appreciation by the audience with a loud round of applause as it was excellent combination of Act and Classical dance.

The performers were accompanied by Nikhil Phatak and Vinayak Kudalkar on Tabla, Sunil Awachat on flute, Rajiv Tambe on Harmonium, Nikhil Mahamuni on Synthesizer along with Pradnya Dev and Siddharth Kumbhojkar as vocalists.

Rejoicing the successful 40 years of Maneesha Nrityalaya, the evening depicted the rich Indian tradition of Kathak Dance through the heart throbbing performances given by the students of the academy.

Kamal Hassan calls for setting up film archives in every state

Footpath my home, drawing my World

‘India Against Hatred’ movement to be launched on August 9