Pune :  Litter is a chronic problem and there are some spots that seem to attract litter to the point that they become dumps. The local citizens who live near these spots complain, protest but often to no avail as no one can fix responsibility for who dumps garbage on the street corners. Repeated cleaning meet with little success as these spots are designated dump spots and get littered all over again.

“These spots are not just aesthetically an eyesore but they also attract vermin and create an unhealthy atmosphere. The heat makes it worse and sets off an unbearable stink”, says Sangeeta Shendage the SWaCH waste picker who has been working in the Kashewadi, Bhavani Peth, where this spot existed, for very long. “Such spots also become convenient dumping grounds for everyone as they can dump waste without any segregation. The recyclables also end up in the landfills instead of in the reuse stream.”

The local corporator Mrs. Archana Tushar Patil also has been keen to have the spot to cleaned up. “As long as there was a spot in people’s mind with any waste, it would have accumulated more waste every day and no amount of cleaning would have helped.” she says. 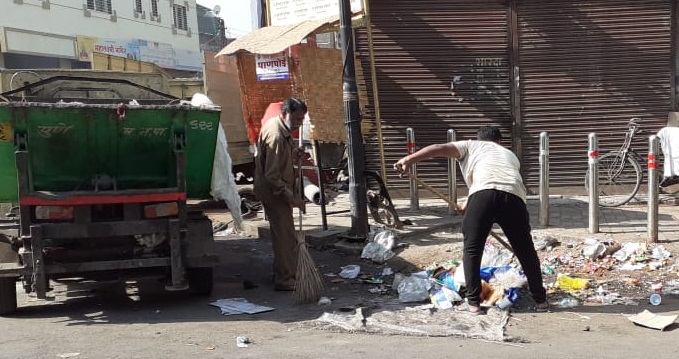 SWaCH coordinators have been encouraging local residents to give segregated waste in the door to door collection system that reduces the burden of Solid waste Management while helping keep the city clean. In an effort to discourage dumping they have put up banners and requested citizens through awareness drives not to dump any waste in that spot. Prabhag coordinators Pooja Sanke and Asha Kadam also made creative rangolis at the site after a thorough cleanup of the spot. Rangolis are traditionally pretty designs with flour. “Rangoli art discourages people from treading on the spot and we can hopefully also discourage dumping waste in the long run. Residents who stop and take notice of it and see a pretty rangoli where garbage used to be.” says Shendage.

SWaCH and PMC have been actively removing garbage dump spots from all across the city in a bid to have a cleaner, better city.

G C Murmu Takes over as C&AG of India