Pune, October 15, 2020 (1.50 am): Several areas in Pune city and district have got flooded due to heavy rains. The weather department (IMD) has issued warnings for heavy rains till October 17.

Pune Mayor Murlidhar Mohol said that Pune Municipal Corporation (PMC) Disaster Management Team and Fire Brigade Squads are ready in Ambil Odha area. Due to the high flow, water entered into the parking lots of the societies adjacent to the stream and some houses.

Sinhgad road was closed from Vitthalwadi. Water flowing from divider at Vishranti Nagar Chowk, Santosh Hall Chowk and Wadgaon Bridge on the highway. It is recommended to avoid traveling to Wadgaon, Dhayari, Anandnagar and Manik Bagh area 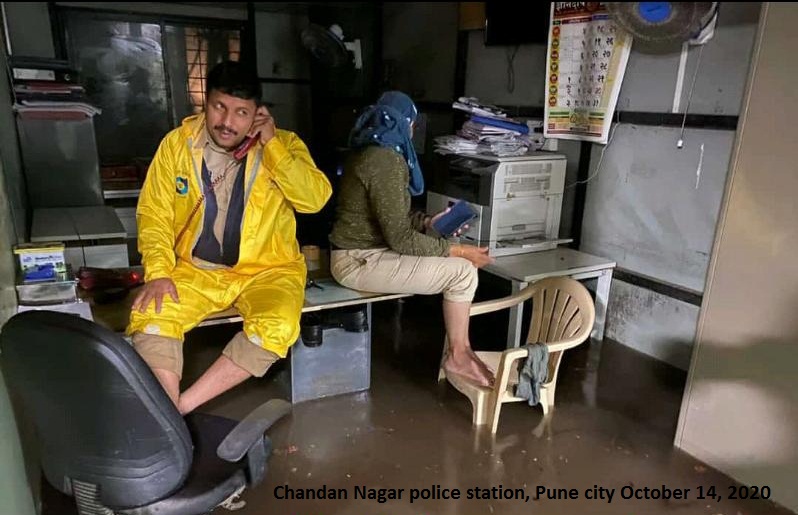 Meanwhile, the dams are getting full and water is being discharged now. “Discharge of water from Panshet Dam to Khadakwasla Dam is at a speed of two thousand cusecs has started”, the officials said.

There was not much rain in the vicinity of Varasgaon, Panshet Khadakwasla and Temghar in the Khadakwasla dam chain.

One millimeter of rain was recorded in Khadakwasla dam area, two millimeters each in Panshet and Varasgaon dam areas and three millimeters in Temghar dam area till 5 pm on Wednesday.

According to the Water Resources Department, the rains started after 8 pm in the vicinity of all the four dams. Panshet and Varasgaon dams are 100 percent full. Khadakwasla Dam is about 80 percent full and Temghar Dam is about 98 percent full. If the rains continue in Panshet and Varasgaon dams, more water will be released from these dams to Khadakwasla dam. Therefore, Khadakwasla dam is likely to start discharging more water into Mutha river. In this regards, the citizens near Mutha river bank should be careful, an appeal has been made by the water resources department.

Gunjavani dam and Ghisar area received heavy rains. Discharge of water has started at a speed of 1676 cusecs. If the rainfall increases, the discharge will increase.

The district administration has appealed to residents to remain vigilant.

Heavy rains hit Indapur area of ​​Pune district. Many buildings are surrounded by water. Increased discharge of water from Ujani dam in Solapur up to 2 lakh cusecs.

In Ketki Nimgaon village, 55 people were trapped in the flood and 40 of them have been evacuated and 15 others are still stranded. Two persons have swept away with a vehicle near Indapur but were rescued due to timely help. This information was given by the sub-divisional officer of Baramati.

Lockdown Might Have Gone But Coronavirus Has Not: PM Modi

Mumbai: Railway Will Allow Women To Travel On Suburban Trains